Welcome back to the multi-part series on my Road Trip from California to Virginia taken this spring.  I guess I should have made that clearer in the beginning. I struck out from Santa Barbara, California, and spent a good two weeks working my way east. I made stops in lovely places like Las Vegas, Zion National Park, Arches National Park, Pittsburgh, Lake Anna, Washington D.C. and more. The past few weeks and the next several weeks will be filled with instillations of those exciting stops along the way.

Anyway, welcome back and onward we go!

When we last talked travel, I was as far as the Coral Pink Sand Dunes in Utah.  Leaving the sand dunes, I again struck out east.  Moab, Utah, was my next destination.

Moab is a tiny, sporty, artsy little town in eastern Utah on top of the Colorado Plateau.  Its most famous features include Arches National Park, and Canyonlands National Park. Though small, it is visited by many tourists on the hunt for outdoor adventures each year. Off road Jeep treks, mountain biking, hiking, climbing, white water rafting, 4x4s, base jumping, slack lining, and more are offered to intrepid adventurers near Moab.  Want to know more? Visit Moab’s Tourism Website.

The best time to visit is late-spring to early-summer, or in the fall. Though there is something to do there any time of year, high summer and deep winter can experience extreme temperatures. My mid-to-late-April arrival was perfect. The weather couldn’t have been better; warm and sunny during the day, and cool at night.

When I arrived the sun was just setting.  I knew that by the time I got to the condo I would be too tired to venture back out.  So I stopped at a little grocery store for supplies. Some pasta and veggies for dinner, and a six-pack of a local brew, HooDoo, a Kolsch style ale by Unita Brewing Company.

Once at the condo I dropped my bags cracked open a beer to relax and enjoy the last of the settling twilight from the back porch.  The views were astounding. Snow capped mountains on one side and red orange sandstone plateaus on the other.

The next morning, feeling refreshed, I ventured towards downtown Moab.  It is a cute little town.  There are plenty of coffee shops, restaurants, artisan boutiques and outdoor equipment general stores.

I spent time admiring the local artists’ work, and bought a few small prints by Serena Supplee. She was my favorite of the local scenery artists displaying work throughout the town.  Her use of color and bold shapes made for work that felt almost surrealist if the subject matter wasn’t sitting on the horizon for easy comparison. 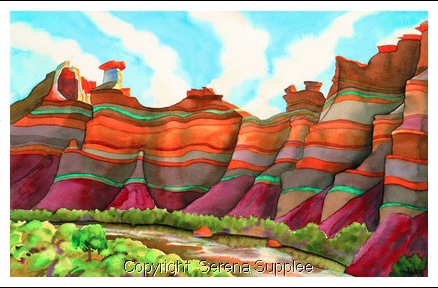 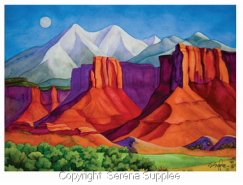 Feeling hungry, I made my way to The Moab Brewery, a restaurant and brewery at the top of the hill, just outside the edge of downtown.  They had a bunch of great beers on tap. It made it hard to choose just what to try! Since it was lunch time I settled on the Dead Horse Amber, a mild beer, good cold and at 4% a reasonable choice for a midday meal.  It complimented my gigantic  burger and fresh cut thick fries well. The Moab Brewery was good. They had good food, good atmosphere, and great beers.

And the best part is that since it’s a brewery too, you can buy cans and bottles to take home with you. I picked out the Over the Top Hefeweizen, Black Raven Oatmeal Stout, and Squeaky Bike Nut Brown Ale to try later.

I just wish I had had more time to spend in Moab.  I would have explored the more adventurous options around the town. A jeep safari deep into the beautiful canyons and ridges around the Colorado Plateau, and definitely some more hikes.

As it was the day passed quicker than I would have thought. The next day I had plans to visit Arches National Park for the day and get on the road by the late afternoon.

Check back next week for stories from Arches National Park.

Have you ever had the urge to just drop what you were doing, pack a bag, and set out on an adventure? Seven years and over two dozen countries later, Aeri Rose is proof that excitement, independence, and discovery await those who are bold enough to say “yes” to life’s craziest choices. When not exploring the world with her little grey backpack, Aeri Rose an be found living a nomadic lifestyle traveling the United States as a writer and entrepreneur.  To follow Aeri on all her adventures, check her out online at travelingwithaeri.com; or on Facebook at www.facebook.com/aerirose.