The Vardo. It is happening!!!

In one of the more absurd maneuvers of my life (so far), I have decided to trade Alice, the Jeep Cherokee, with a lovely little Rennie couple in Texas; in exchange for a fully built road worthy vardo!

If you’re new here, to catch you up to speed, here are some definitions you might need to know in order to understand the above sentence.

– vardo – n. a wagon first used by french circus folk in the 1800’s and later adopted by the Romani culture. See example below. 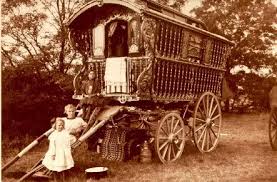 – Rennie- n. a name, endearingly coined by the culture itself, given to those employees of Renaissance Festivals.  Renaissance Worker was shortened to “rennie” to mimic the slang term for a carnival worker- “carnie”.

Now, I first pitched this beautiful vardo concept in an earlier post titled “Home Sweet Home?” And like anyone could have guessed, our four months to work on the project quickly turned to three, then two, then dwindled fearfully to one month. Would the vardo get shelved for another year? There would be no way to build it on the road.  woe’s me!

But wait! Fear not! There are other Rennies, experienced in the art of traditional vardo construction, and just hankerin’ for a little Jeep of their own! So with great excitement the planning has begun.  Check out our initial sketches! Very Professional, no?